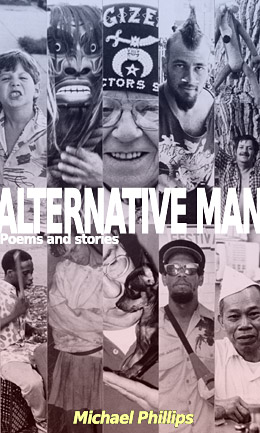 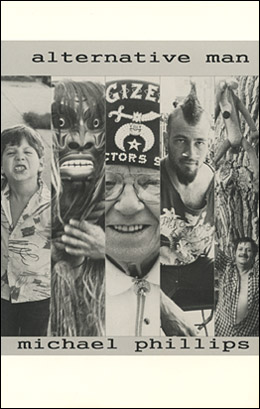 After more than ten years of searching, I have finally tracked down the remaining brand new old copies of alternative man. They were found in a sealed box in the corner of a decommissioned ICBM silo in New Mexico, but that's all I can say about it. Let the rejoicing begin. Or something. Mother Road Publications, ISBN 0-9636829-5-4

Yes, the name on the book is Michael Phillips. That's my old name. Now I'm Hannah Phillips. Don't be confused, it's just the modern world coming to bring you sunshine and new ideas and concepts. You'll be fine.

Musician turned writer has a keen eye for humor, pathos, & the bizarre in these short pieces. - Bookpeople

[alternative man] contains some of the best stuff by a new writer in or out of the small presses. - Andersen Prunty, Absent magazine

let me tip the hat to the poet Phillips! the book - 'Alternative man' was a great read - I'm going to share his stuff with my crowd. - Ulvis Alberts

The fiction has to be the strangest...the five star fucked-up award goes to "anything for a quid", about a guy who visits a prostitute in England who turns her clients on with a monkey puppet made of socks. - Michael Halchin, Bleeding Velvet Octopus magazine

Check out the latest podcast episode

Or check them all out at THIS IS NOT A TEST.

To order any of the items on the site, use the futuristic buttons in the item description. That will take you to a PayPal cart, Amazon, Smashwords or a publisher's site. Look at all the places you could go. It's like an adventure. All electronic editions are DRM-free.

If you are a non-PayPal type, drop me an email and we'll work something out. We'll be pen pals.